This week in football fans in this country will experience the future of VAR for the first time.

No more waiting around while the officials spend minutes drawing lines on the bottom of Harry Kane’s shirt sleeve — is that about right? No, no, down a bit, that’ll do — to find out if he is a few inches beyond the last defender.

After four years of development, nearly 300 matches of testing, the new semi-automated offside technology will launch officially in the Champions League group stages before being used at the World Cup this winter. 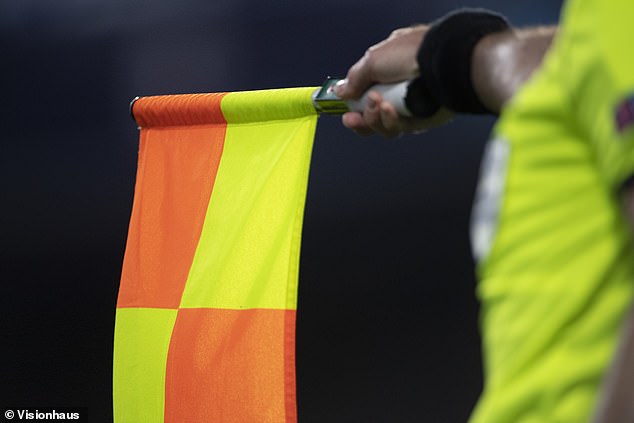 Chelsea, Man City and Liverpool kick off their campaigns in Europe’s elite competition away from home but Tottenham welcome Marseille where limb-tracking cameras inside the stadium will make tight offside calls quicker and clearer.

But as football welcomes a technology that could one day tell when the ball goes out of play as well as if Kane’s toenail is offside, will it eventually spell retirement for the linesman and their flag?

How will it work?

Twelve cameras installed under the roof will track the ball and 29 points on each player 50 times a second to plot their skeleton, collecting 180 million pieces of data over the course of the match.

A three-dimensional replay of the incident will appear to the VAR in a matter of seconds. The VAR will check it before making the final decision. Hence the semi-automated offside. It is still down to the officials to decide, but fans at home will see it on the television and, at the next break in play, supporters inside the stadium too.

HOW THE TECHNOLOGY WORKS

Cameras track 29 points on each player 50 times a second (below) to create a three-dimensional graphic of a tight offside incident. It will be sent to the VAR in a matter of seconds and will show the decision from the perfect camera angle.

Twelve additional limb-tracking cameras will be placed under the roof of the stadium to plot the ball and players’ body parts to judge the tightest offsides more clearly and accurately.

The technology pinpoints the precise moment the ball is played and can plot exactly where on the pitch the players are.

The VAR will be alerted to an offside incident in a matter of seconds (right) and a decision should be made before the players finish celebrating. 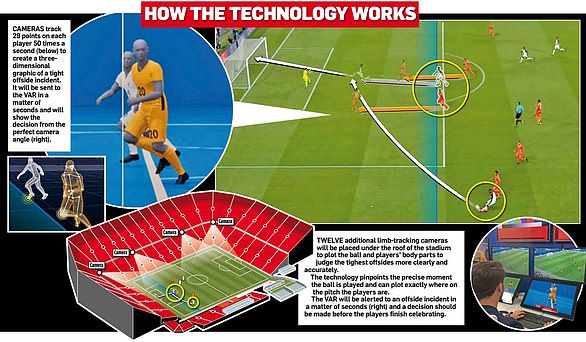 How long will it take?

FIFA expect the whole decision-making process to take around 25 seconds and should be wrapped up before the players have finished celebrating.

That is much faster than FIFA’s average of 70 seconds, and the countless ones to last minutes on end, though incidents which involve more subjective decisions, such as interfering with a goalkeeper’s line of sight could still take a while.

Will fans trust it?

The technology was tested behind the scenes in the Champions League last season as well as at the Women’s Euros. Chelsea have experienced it before, at the Club World Cup, while it was used officially by UEFA for the first time this season in the Super Cup between Real Madrid and Frankfurt.

It’s the same HawkEye-tracking technology that’s used in cricket and tennis. And it’s the speed and clarity of the on-screen graphics that inspire trust. 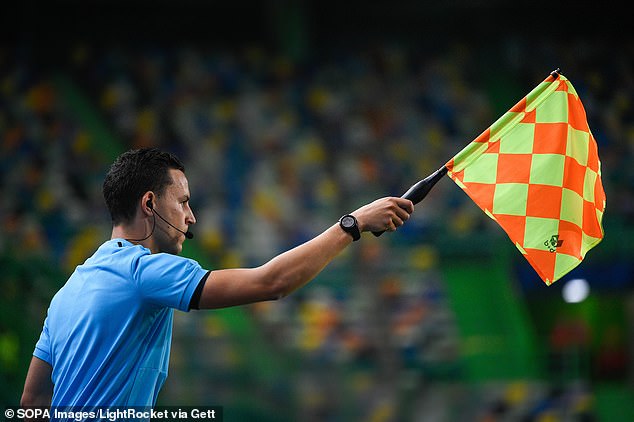 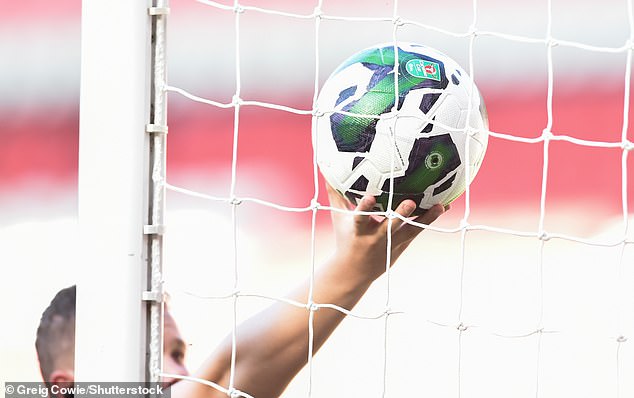 ‘The quicker a decision is made, the greater acceptance there is from fans,’ Peter Irwin, global commercial director at HawkEye told The Mail on Sunday.

‘The longer it takes to make a decision, the more people doubt it. Where cricket, tennis and goal-line technology have benefited has been that a virtual replay has shown the decision in the clearest possible way.

‘Now we’ll be able to show offside from the best possible angle and it will be clear which parts of the body are offside.

‘It also takes away the subjectivity of a human placing an offside line and is based on millions of data points making this decision. It should be trusted in the same way goal-line technology is trusted.’

Does it know when a ball is kicked?

At the World Cup, FIFA will also use an Adidas ball with a sensor inside that tracks data at 500 times a second to allow for even greater accuracy. Throughout the Champions League, officials will use only the tracking cameras. 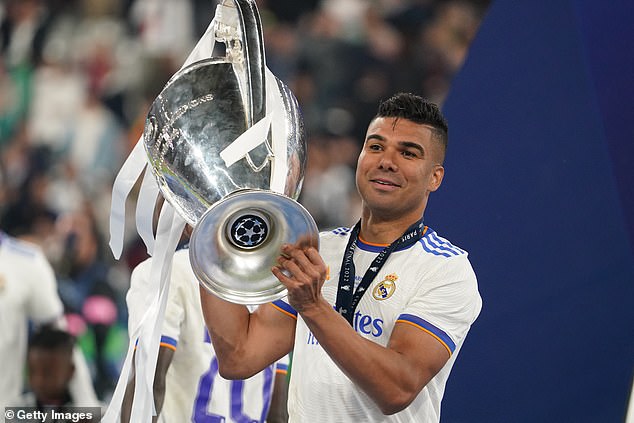 HawkEye’s technology pinpoints the exact moment the ball is played, putting to an end the flaw revealed by The Mail on Sunday more than three years ago that 50 frames-per-second cameras were not advanced enough to be able to judge for certain on the most marginal offside decisions when players could move as much as 14 inches between individual frames on screen.

‘Fans should have fewer concerns about what happens between video frames,’ says Irwin.

Is this the end of offside controversy?

The clarity and accuracy is the good news. The bad news is it will bring the return of the toenail offside. This season in the Premier League a margin of error is used for the tightest offsides to allow for the flaw in the system. If the lines touch, the attacker is onside. 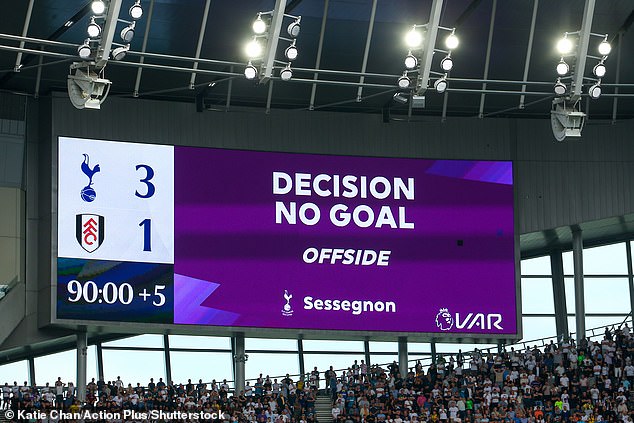 That won’t happen in the Champions League or the World Cup. For a system that is so accurate, offside will mean offside. ‘I don’t think technology will get rid of talking points because football’s a passionate sport,’ said Irwin. ‘Teams and fans will still be disappointed when things go against you.

‘I believe a lot of the controversy we’ve had on offsides, the time taken out of the game, the lack of clarity over how it’s visualized, will be significantly improved.’

How could IT be used in the future?

For now, the technology will be used just to decide on offsides and to alert officials if a goalkeeper comes off his line for a penalty.

It could, though, assist referees in many more ways. It can tell far more accurately where the ball strikes a defender on the arm so would help judge handball. It can tell officials if the ball went out for a throw-in before a goal. It could show, too, where exactly on the leg a player tackled an opponent and measure how intensely.

Off the pitch, developers believe it will transform coaching — even gaming.

Will this spell the end of the linesman?

Is it time, then, for the linesman to pack his bags, roll up his flag and retire? 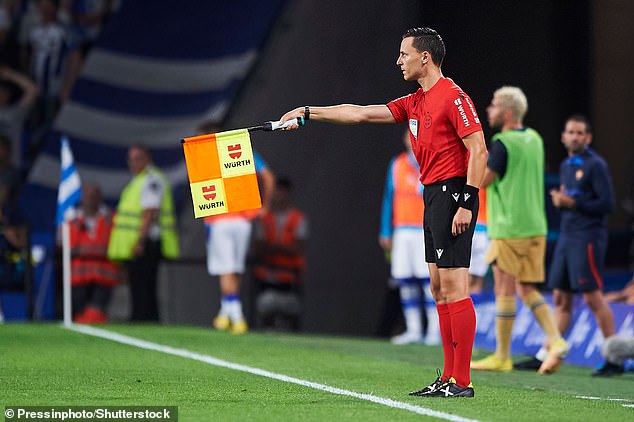 For now, it is still down to the officials to judge when someone has interfered with play, committed a foul… if the ball has remained in play.

‘They still do a great job and what you have to remember is they do a hell of a lot of decision-making outside of just offsides,’ says Irwin.

The robots are not fully taking over — not yet at least.