Depending on your tolerance for pain, getting a tattoo can be an uncomfortable experience, but new technology developed by scientists at the Georgia Institute of Technology could be about to change that.

A team led by chemical engineer Mark Prausnitz has created a low-cost skin patch containing microscopic needles smaller than a grain of sand. Each of the so-called “microneedles” acts like a pixel and can be arranged in different patterns. Each one is then filled with ink before being pressed onto the skin a single time to transfer the design, with no pain or bleeding involved. The process can even be self-administered. 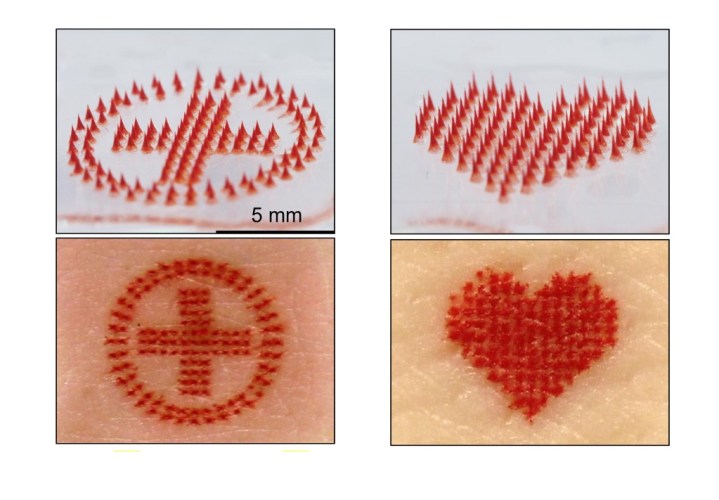 While the patch could clearly present a welcome breakthrough for folks keen on getting a cosmetic tattoo but who are currently put off by the pain, the team actually began its research with another group in mind: medical patients.

“We’ve miniaturized the needle so that it’s painless, but still effectively deposits tattoo ink in the skin,” Prausnitz said in an article about the new patch, adding that due to the ease of administration, it can also make medical tattoos more accessible.

Medical tattoos can be used to cover up scars, guide repeated cancer radiation treatments, and restore nipples after breast surgery. They can also take the place of bracelets to function as health monitors, alerting doctors to serious conditions such as diabetes, epilepsy, or allergies.

Prausnitz’s team has for a long time been researching microneedles for vaccine delivery and has also started working on using the tattoos to help animal organizations identify spayed and neutered pets. But it’s the patches’ suitability for cosmetic tattoos that’s been gaining the most attention.

“We saw this as an opportunity to leverage our work on microneedle technology to make tattoos more accessible,” Prausnitz said. “While some people are willing to accept the pain and time required for a tattoo, we thought others might prefer a tattoo that is simply pressed onto the skin and does not hurt.”

Tattoo artists needn’t worry about the patches taking their jobs, as they appear geared more toward small, simple designs rather than elaborate ones that require a lot of skill and time.

Prausnitz makes a similar point: “The goal isn’t to replace all tattoos, which are often works of beauty created by tattoo artists,” he said. “Our goal is to create new opportunities for patients, pets, and people who want a painless tattoo that can be easily administered.”